skip to main | skip to sidebar

A Story of Redemption, Interconnectedness,
and the Reawakening of one's own Innocence...
a vivid portrayal of the holographic
nature of Consciousness itself

now available on Amazon
or direct from the Publisher Booklocker 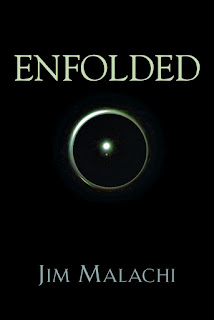 "ENFOLDED is an engrossing series of tales that initially seem disjointed, but eventually coalesce to reflect a unique perspective of reality. Jim Malachi is a masterful story-teller, and describes impassioned brutality and impassioned sexuality with equal artistry. This story discards conventional notions of linear time, instead opting for a cosmos in which events fold into one another in an ingenious, remarkable flow of images and narrative."

"All worlds, including those who inhabit them, coexist as simultaneous events in the imagination of a single mind...that which is known as Consciousness."

"Do not allow yourself to be fooled by appearances. Learn to see beyond the veil of form into the realm of substance―to the essence, until you glimpse something of yourself looking back at you."


"He stood there in silence for a moment with his back to the sun, listening to the distant chattering of squirrels and the rustling of leaves overhead. He stared absently at the length of his own shadow that shimmered among those cast by leaves feathering lazily over clumps of grass and granite markers.


He felt a sudden calm wash over him as he observed the two seemingly opposing worlds coexisting together effortlessly―one of shadow, the other of light. In that moment he perceived the reconciliation of the intangible with the tangible, and was overwhelmed by its simple elegance, and what it inferred about the complex and subtle nature of reality.

"Yes, it is very much like a Dream... a miraculous deception―one in which the Dreamer and the Dreamed are but reflections of one another."

"Perhaps Consciousness is merely a subtler form of matter enfolded into the fabric of existence...continually observing itself."

"There exists a deeper order beyond the five senses
whose reflection we experience as appearances...
it's almost as if our shadows were casting us"

"... for only in the act of loving is anyone truly alive." 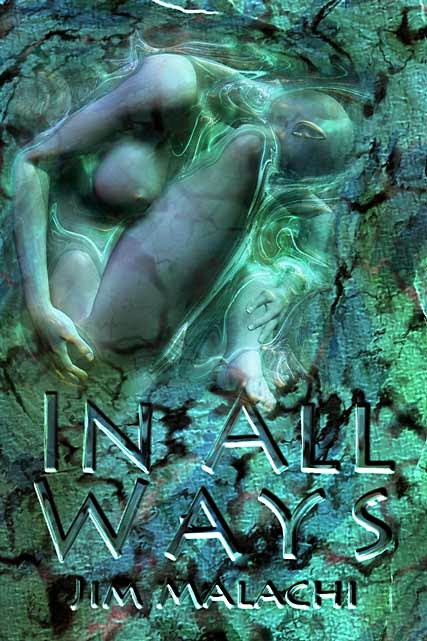 the story of a man who loved the moon


A Review of Enfolded-by Christopher Portman


In All Ways was a masterpiece of poetic eloquence, a rite of passage set in a mysterious but familiar world from a shamanic point of view.  It left me wanting more not only of a sublimely inclusive world view, but of Jim Malachi's beautiful language. A wish granted by the arrival of Enfolded. If In All Ways, was the beginning of a story, Enfolded provides the middle and the end.

Enfolded succeeds in the almost impossible task of demonstrating the interconnectedness not only of everything within the paradigm of our own universe, but of all possible universes.  It is a stunningly visual experience that reaches deep into our emotions and weaves together moments of stark brutality, eroticism, fear of the unknown, love, acceptance of our destinies and of the imperative to acquiesce.  This is a profoundly thought-provoking masterwork of imagination, of spirituality realized.  Jim Malachi has earned pride of place on my bookshelf.

‘Enfolded’ is an entertaining and spellbinding sequel to author Jim Malachi’s novel- In All  Ways that is fast paced and whisks readers immediately away into highly imaginative and fanciful lands of beings and characters, with situations intriguing enough to keep one interested and engaged.It is amazing to witness the author’s creativeness as he brings to life vividly detailed settings entwined with intricately developed cultures to create an exceptionally immersive reading experience as characters of Akiim, Calvin and Jake learn to beat the odds of life’s most challenging situations in their own tales.Full of mysteries, enigmas and thrills to venture, ‘Enfolded’ continues strong from the first in the series, yet remains original in concept and delightful in style. With fiction that seems believable and fascinating, author Jim Malachi has created an engaging narration that readers, adults and fans of fantasy, magic, unimaginable survival and tales concerning the very nature of humanity will adore. Evocative prose and picturesque imagery of this sumptuous sequel creates an uplifting experience for one’s mind and soul that is worth the read and highly recommended. 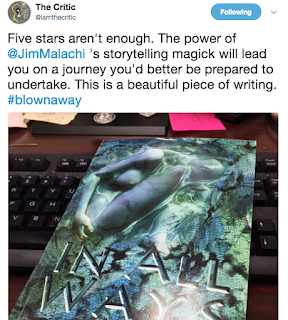 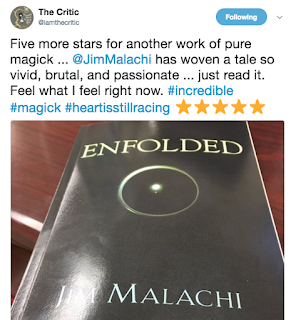